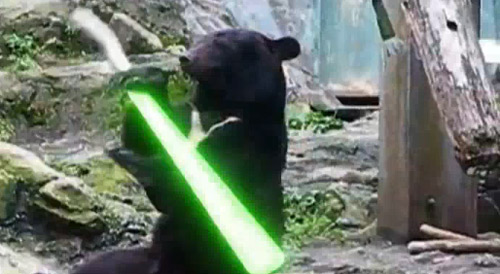 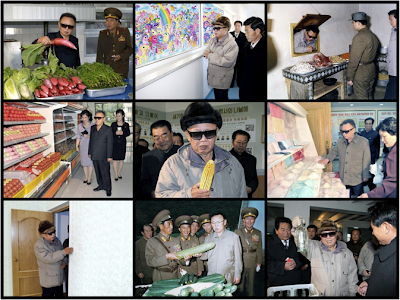 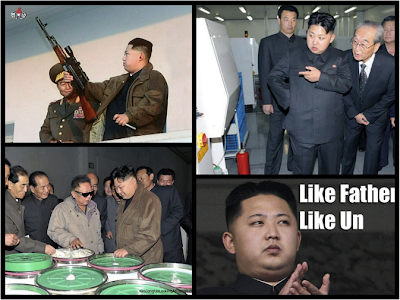 ‘this blog was born in a warm autumn night, 26th october 2010, for reasons unknown.’

The father blog was founded by Portugal-based advertising guy Joao Rocha, the latter by ‘Jason’ a computer guru from suburban Chicago and a self-proclaimed admirer of the original. Both blogs feature photos of the North Korean father and/ or son performing regular inspections of various facilities and institutions. Hence Kim Jong Il/Un looking at [mundane] things (ranging from larger-than-life radishes to womens’ bras.)

This blog is not participatory; the creator crafts all captions in the simple form ‘looking at shoes,’ for example. Nor are the photos manipulated; most are sourced from the state-run Korean Central News Agency.

I think the appeal behind both of these blogs, particularly the original, is that they depict two figures outside of their common mainstream media light. Kim Jong Il/Un are both held as ‘dangerous evils’ but here they appear harmless, simply observing various vegetables and/or discs (oftentimes while donning shades.) The contrast of a known ‘enemy,’ and now his son, performing such ‘inoffensive’ tasks makes the blog somehow ironic and a bit ridiculous.

The original has not only inspired the Kim Jong Un imitation blog, but a host of others, most all featuring political figureheads. Tumblr sites ‘Christian Wulff looking at things’ and ‘Karl-Theodor looking at things’ (links below) both display recent scandal-suffering German politicians ‘doing just that.’ The ‘looking at things’ micro blog, began with a man who ‘knew little about North Korea’ and had no politically-driven motives – imitations have transformed however into an outlet for expressing political discontent and/or public shaming.